You are here: Home1 / About Me

My yoga journey started when I was 29, I wanted to quit smoking and a friend had suggested Yoga. My first class was a vinyasa Yoga class and the feeling of sheer bliss after the Yoga class was incredible and I was hooked from that very first class!

I think Yoga is for everyone. It helped me quit smoking in my twenties. It was an invaluable aid in the births of my three boys, especially the home-birth of my youngest in my thirties. I am now in my forties and have returned to work; yoga has given me the confidence to balance motherhood and work.

After graduating with an Accounting and Finance degree I worked in the corporate arena in Dublin and Sydney for five years. Then I completed a H.Dip.Ed in Trinity College Dublin and did my teacher training in NewPark Comprehensive in Blackrock. To follow eight great years of teaching at NewPark, I took leave to have three amazing boys in three years. Then a bump in the road, I had to take carers leave to help two of my sons through two serious health issues (Leukaemia and kidney failure). Having nurtured a toddler through over 3 years of chemo while managing another child’s kidney failure, I could see light at the end of the tunnel. So with my three boys happy and doing well, I knew I needed to take some time for me!

In 2014 I decided that I needed a personal challenge. After much research on a variety of yoga teacher training courses, I decided to do the Yoga Teacher Training Course (RYT 200 hour) with Ashtanga Yoga Dublin in 2014 run by David Collins and Paula Herbert. They’re both fantastic teachers with boundless knowledge, passion and dedication. After finishing the course in December 2014, I signed up to do the Rainbow yoga kids programme in January 2015 with Catetana Rodenas, learning lots of ways to engage kids from toddlers to teens with yoga.

I continue to develop my Personal Asana, Pranayama and Meditation Practice. Yoga workshops attended include those given by David Collins, Paula Herbert, Paul Dallaghan, Peter Sanson, Sudhir Tiwari and Manju Pattabhi Jois. I look forward to continued practice at Ashtanga Yoga Dublin, yoga with Marianne Jacuzzi and a Yin Yoga workshop in Spain this summer with Josh Summers.

My philosophy on life would be to live in the present, work hard, be nice to people, and ensure you laugh hard at least once a day !

“Enjoy the little things in life because one day you will look back and realise they were the BIG things!!!” 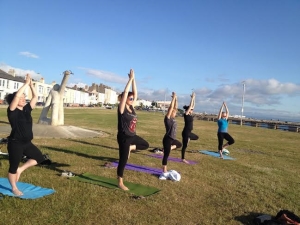 FOR MORE INFORMATION OR TO BOOK A CLASS, PLEASE CONTACT ME